1. Select Tweet Analytics from the analytics drop-down menu on the top menu bar. 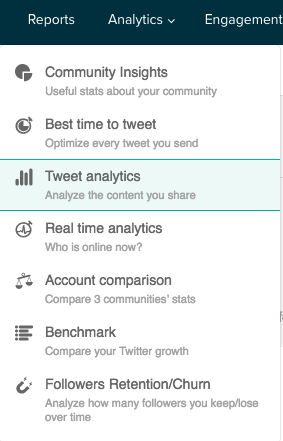 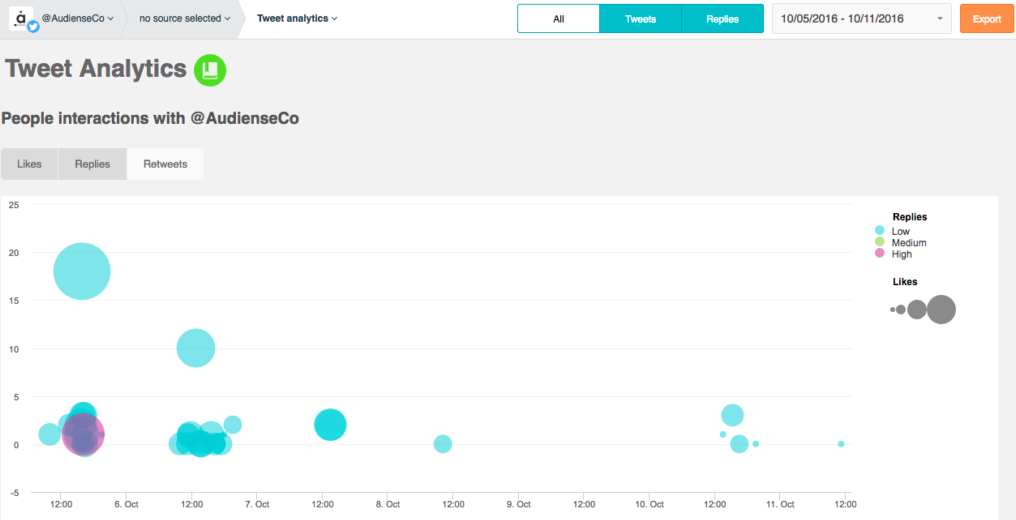 On the breadcrumb bar you can choose to view all Tweets, Tweets, or just replies. Use the calendar to modify the timespan of the information and click export to export to Excel.

The dashboard has various panels:

People interactions – A graph in which each circle represents a Tweet.

Mouseover any of the circles to see more detailed information:

The X-axis shows the timespan. The Y-axis data is variable and shows the number of likes, replies or Retweetsdepending which is selected. The key to the right of the graph shows what the size and colour of the circles represent.

If you select likes for the Y-axis:

If you select replies for the Y-axis:

If you select Retweets for the Y-axis:

Engagement stats – Click any combination of the Retweets, replies and likes icons below the chart to see those metrics on the chart.

Engagement rates – This panel shows some social media metrics which give you an idea of how you are performing in Twitter.

Click on Retweets, replies, or likes to see the users who engaged with your Tweet. Click the @username to open the user details sidebar where you can carry out many typical community actions.

To add the Tweet as a source mouseover the Tweet and click the emerging add as a source button in the top right. You can continue to monitor the Tweet as the source is updated after synchronisation. The source appears on your homepage in the Source: Discover Retweeters section.

Audiense distinguishes between a reply and a mention. A reply is a response to a Tweet that begins with the @username of the person you’re replying to. A mention is a Tweet that contains a @username anywhere in the body of the Tweet. However, in Twitter replies are also considered mentions.

The dashboard reflects any ‘events’ which have occurred in the time period selected. For example, in this time period you may have received a like of a Tweet which you posted two years ago. Tweet Analytics, on the other hand, is based only on the Tweets of the selected period and the ‘events’ that these specific Tweets generate. For this reason you may notice fewer likes, Retweets, replies, etc in Tweet Analytics than you see on the dashboard.

There may be some differences between the info you see in Twitter and the info presented in Tweet Analytics. This is because we don’t use exactly the same criteria as Twitter to calculate our data. For example, Audiense groups replies and mentions separately so you may see that we show two Tweets, one reply and one mention while Twitter shows four Tweets. It’s normal that there are slight discrepancies between the two platforms