What is the Insights Summary View?

Learn about the insights summary view, what each summary means and how you can use each insight...

This summary view is the initial dashboard that you will see when you select your report. You will see a summary of the full audience broken down into the following panels: 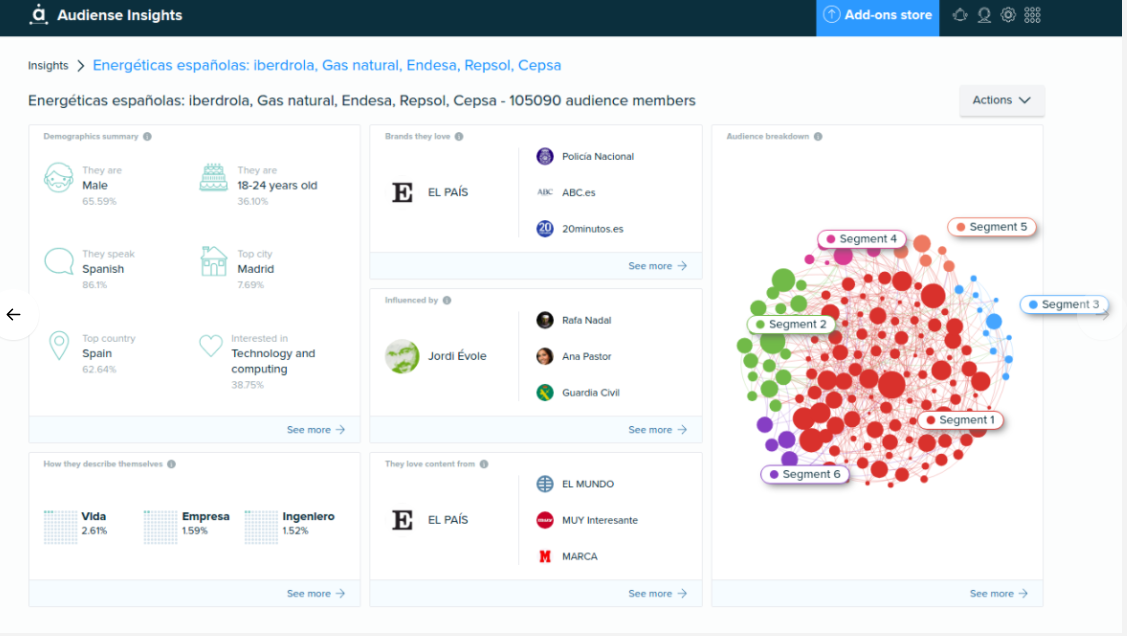 Understand the breakdown of your audience into unique segments based on demographics and interests.

This summary shows the top demographic traits for your audience. For example, a country could be influential in targeting certain groups of people or a popular language could change the language of your ads entirely.

How they describe themselves:

This summary shows the top words used by your audience to describe themselves. Use this this to understand what your audience does and how they identify themselves. For example, are the bloggers? Or do they love music? Maybe they are football fans? Use this to get into the mindset of your audience and create more targeted content.

This summary shows the most popular media outlets for your audience. Use this to help decide where to place your adverts or publish your sponsored contents

Macro influencers: These are the high profile people, often celebrities with a huge reach.

Major industry figures and celebrities have spearheaded some of the most iconic advertising campaigns of all time. The right connection, such as the one between Michael Jordan and Nike, will reward the brand with a lifelong association with a popular figure that drives sales for decades. It’s an ideal situation when it works.

On the flipside, access to the audiences of these bigger names doesn’t come cheap. A single sponsored Tweet from someone like Cristiano Ronaldo has been reported to cost a shade under €250,000. There’s a risk that the delivery of the message (or the message itself) may fail to connect. This highlights the importance of researching the audience of your potential influencers to identify who is engaging with them, and if your audience has a significant crossover with who you want to be targeting.

If the celebrity is particularly renowned for their sponsorships and advertising deals, a lot of people may not take too much notice of the celebrity selling another product or they may not completely trust the message being delivered.

Micro-influencers: Often less followers (10-90K followers), these people are often more specific to an industry (they could be industry experts).

These generally wouldn’t be celebrities, but would have a significant following in the audience you wish to target.

What they lack in millions of followers, they often make up for in entrenched credibility with the audience you want to reach. This allows them to bring your brand into the conversation at a level that’s personally connected to a lot of people in the audience, this is something that a celebrity or a brand account may be unable to do. As an example, PUMA used popular and socially active local runners in their #IGNITEYourCity campaign. The influencers they chose recorded engagement rates 24 times higher with their campaign Tweets than the ones PUMA’s core accounts did. This gives PUMA eyes on their campaign in the short term, and a new, engaged audience to target in the longer term.

This summary shows your audience’s favourite brands! Many have used this to understand potential brand partners as a musician or a sports team. Brands have found this a useful way to understand competitors in their markets and to really understand the key players.